Welcome to the NEW Scifi-Collector.com!

I am so excited to be working on the updated Scifi-Collector shop and launch it's new blog!

In case you don't know, I'm Lori Anne Brown and I've been a science fiction fan since I fell in love with the original Star Trek series (in syndication) at the age of 12. I've been collecting just about as long from comic books to toys to model kits. When I was living with my parents and had extra money, I collected just about everything - Star Wars, Star Trek, Battlestar Galactica, and tons more. As I got my own place (and bills!), I've narrowed my personal collection to Star Trek original series and Firefly, but love seeing all the awesome new pieces that come out each year.

Years ago, I launched Scifispace.com which became an About.com Mega Site and is mentioned on the Firefly DVD set for my Firefly section (I was also the #2 Browncoat when the official Serenity movie site was up). I also ran a science fiction convention for 13 years, formed and headed the USS PAEGAN, Orlando Chapter of Starfleet for many years, ran Starfleet Academy for Starfleet International for 4 years....okay, I am a sci-fi geek for sure!

Since 2001, I've been focusing on building my business, LABEShops, and its network of online stores including Scifi-Collector. It's been a bumpy road to say the least but here I am, still flying, and working on improving each of my stores in turn. And it's Scifi-Collectors turn now! I'm also working on updating Scifispace.com and updating it regularly again.

Over the coming months I'll be expanding with a lot more products - including some exciting exclusives - and tweaking the store layout and function to work better for you.  Stay tuned! 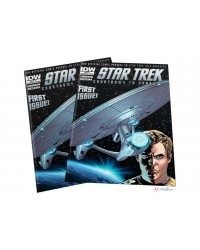 I am so excited to announce my first, EXCLUSIVE collectible! Scifi-Collector.com has partnered with our friends at UK Conventions Limited as the official US Distributor of their Enterprise Edition of the Star Trek Countdown To Darkness Issue #1! Star Trek Countdown to Darkness #1 is the first installment in a four-issue prequel mini-series that will set the stage for the eagerly awaited Star Trek sequel Into Darkness opening in theaters on May 17, 2013. For the new mini-series, IDW has once again tapped the team behind 2009’s Star Trek: Countdown, namely Roberto Orci, Mike Johnson ..
Read More

0 Comments To "Welcome to the NEW Scifi-Collector.com!"